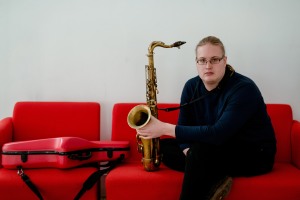 UK-based Irishman Riley Stone-Lonergan started working as a professional musician in Ireland at the age of 16. Riley soon moved to the UK to study at Leeds College of Music. In 2011, he graduated with 1st Class Honours and was the recipient of a number of awards including the Dave Cooper Memorial Prize for Jazz Saxophone, John Scheerer Prize for Woodwind and David Hoult Prize for Outstanding Performance.

Selected as a Yamaha Jazz Scholar in 2011, Riley’s quartet was featured in Jazzwise Magazine as well as performing at the 606 Club in London. Shortly after, Riley moved to London and began to work with various London groups. He was able to do a tour of Germany, a televised performance with NYJO at the Royal Albert Hall as part of the BBC Proms (including special guest Tim Garland) and was nominated for the Rising Star Award at the London Music Awards 2015.

In recent years, Riley has made three extended trips to New York City. Here, he studied with Seamus Blake, Chris Cheek, Rich Perry and Joel Frahm and recorded his original material at Tedesco Studios, as well as performing in Washington DC.

In the last few years Riley has been a part of two co-lead projects who have both self-released an album and toured extensively:

Perpetual Motion Machine is a rock and metal inspired twin guitar and twin saxophone sextet made up of Jazz musicians who want to explore sonic realms outside Jazz while still preserving its improvisatory nature. The music is entirely written by the members of the band. PMM recorded their debut Iginition in 2017 and followed this up with a 15 date tour of every corner of the UK.

Family Band is a chordless trumpet and tenor quartet brought together by a love for late 60’s free Jazz in the vein of Ornette Coleman, Dewey Redman, Don Cherry and John Coltrane, but their music has evolved into its own beast, with spoken word and political themes woven in. They self-released Board of Origin in 2018 and embarked on a month long UK tour.

Riley also leads his own quartet and gigs regularly in London, throughout the UK and Europe. He performed.as a featured soloist at Bergamo Jazz Festival in Italy and has toured throughout Ireland, Germany, Poland and Ischia, an island off the coast of Italy, as well as all the most prestigious festivals in the UK including Manchester Jazz Festival, Edinburgh Jazz Festival and London Jazz Festival. In March 2019 Riley did a week long tour of France under his name with French pianist Fabrice Tarel. This was such a success that he is going again in August for more concerts and to record a video, and in October for a further week-long tour. They are planning to record the project in the near future.

Riley’s primary focus as a music creator is improvisation, the element of Jazz that brings him the most joy. Riley’s entire life and career is driven by the desire to both improvise and hear other people improvise, it is the highest level of creativity and artistic expression.

Lance Liddle, Bebop Spoken Here
“…the improbably named Riley Stone-Lonergan…blew great tenor. Rollins, Coltrane, Brecker – he’d learned from them all and with a tone that could be lyrical or biting, tender or violent – a name to remember (as if one could forget!)”

Jack Massarik, Jazzwise (Review of the Proms 2012)
“…when the band’s latest crop of soloists was finally let off the leash, the results were spectacular. Riley Stone-Lonergan, a brilliant young Irish tenorist snapped up by NYJO after winning one of last year’s Yamaha Jazz Scholar Awards, was the evening’s outstanding player.”

Eddie Myer, Jazzwise
“…his sincerity, and his affection for the material, impress as much as his comprehensive technique.”